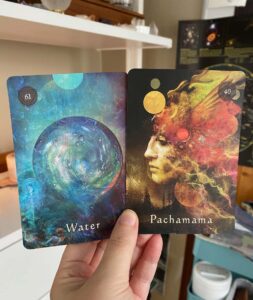 Double cards again today, two that pair so well together that they should almost never be separated. Where there is water, there is inevitably conscious life, whether or not we can recognize it. Physically, we are mostly water and esoterically, we are mostly spirit. This flowing, changing, multi-state “matter” is a perfect analogy for the complex, many-bodied, multifaceted nature of what we are as mind-body-spirit entities. We are a medium, an instrument, for conveying energy through vibration. The patterns we see on a rippling lake, touched by a current or a falling stone or the wind, happen inside our water-based bodies constantly. We translate them as thoughts, emotions, sensations and construct worlds upon them.

These patterns of rippling vibration happen inside the Earth, too. Pachamama is the Quechua word for Mother Earth, Gaia, the living consciousness of the planet we live on, the world mother who gives life and sustenance. Deep inside, at her heart, is not a molten metal core but vaporized elements in a plasmic state, engaged in constant motion. This internal vibration intersects with other kinds of movement and oscillation, as Earth spins on her axis and moves around the sun, and as the solar system and galaxy hurdle along their spiral paths in space.

Ley lines and energy nodes are simply energetic ripples (from Earth’s movement or the vibratory influence of other stellar bodies and circuits) that can be detected on the surface in the same way that dowsers detect channels of water flowing underground. In fact, energy channels and invisible water channels co-occur. If we could see beneath the “holiest”, most energetically active places on the planet, where shrines and temples and churches have been built on top of each other for millennia, we would find springs of water and great caves where molten and gaseous elements have cooled and solidified into wondrous crystal formations.

Short note on 7 and 4: 2023 is a 7 year numerologically. 7 is associated with the spiritual and metaphysical, with going beyond appearances into deeper, higher truth—whether or not that truth is something we want to hear or integrate. 4 is an earthy, practical number, Saturnian and Capricornian: structure, discipline, order. So perhaps these numbers speak to 2023 as a year of seeing through the established structure of the material world to its spiritual foundations and metaphysical underpinnings. I suspect that this will be provocative and disturbing.

(Method: With the Aquarian community in mind and heart, I shuffle the deck until a card falls out. Deck: Mystical Shaman Oracle by Alberto Villoldo, Colette Baron-Reid and Marcela Lobos)