Today’s Cards: Aquarius new moon and the beginning of a new lunar cycle 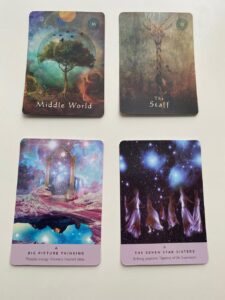 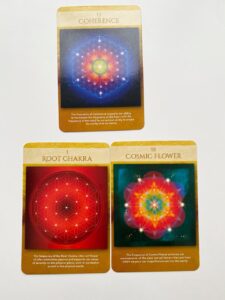 As of writing this, the sun has just moved into the first few minutes of 0° of Aquarius, still within 1° conjunct of Pluto. In a few hours’ time, the moon will be joining the sun in Aqua for the first new moon of this lunar cycle. If you’re feeling some contractions, it’s the fast approaching birth of Pluto into Aquarius, which will happen in two months’ time at the spring equinox.

First card out for the new moon is this big tree of the Middle World, painted like the Vitruvian Man with roots and branches reaching out. This is a symbol of humanity’s position as God made flesh, a being that is able to unite the highest highs with the lowest lows, uplifting the profane and making sensible the sacred. The Staff echoes and empowers this sentiment: the tree made into a representation of support and authority and balance. Together, these cards feel like an encouragement to embrace the Tao, a middle way that flows between polarities, effortless in its flexibility.

The next two cards, Big Picture Thinking and Seven Star Sisters, are both Pleiadian influences. The Pleiades is an open star cluster that is younger than our solar system, and the humanoid Pleiadians who grew up there evolved through third density without the significant limiting negative factors we’ve had here on 3D Earth. So what they lack in deep insight about horror and suffering and evil, they make up for with great hope, love and experience in creating societies that balance the needs of individuals with planetary ecosystems. The “Aquarian Age” is not something that needs to be invented and built here on earth; it’s the way spiritually evolved nations have learned to live for millions of years before we ever even existed.

Now I look at this Coherence card from the Sacred Geometry deck that comes in on 13/4, a number that is very much based in material reality. This is a space of knowing the truth of who and what we are, what we desire, and planning for what it will take to achieve. Alongside Root Chakra (1) and Cosmic Flower (18/9), I see a callback to the Middle World tree (36/9): the realization of our desire for a prosperous, healthy, united Earth Humanity is dependent upon rooting deeply downwards and inwards while reaching upwards and outwards. The number 9 signifies high and powerful guidance that requires great humility and openness to intuition—virtues that we aren’t exactly known for on this planet these days, perhaps because of deep wounds in our history that still need to heal.

So that’s the work for this Aquarius new moon and the upcoming movement of Pluto into Aqua. Perhaps that’s why karma seems almost instant these days: the past is rearing up for a reckoning, and when we are willing, wise and loving Friends are here to help.