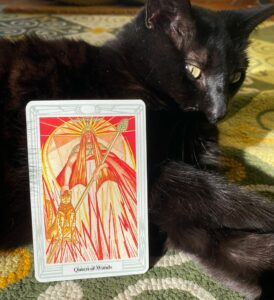 There’s a fiery, electric feeling in the air today. This Queen becomes the link between the lower world yearning for connection with the divine, and the heavenly realms reaching down to meet and elevate the natural. She is enthroned, at peace with her eyes closed even though it looks like she’s on fire. On the peak of her helm is the swooping falcon of Horus, a symbol of divinity and an intimate connection with the Sun as our local representative of Source.

Cats big and small are often guides or protectors, being bridges between the physical and the astral. They also represent power, the force of nature organized through purified will, unsullied by calculation or deception. Cats are grounding, challenging and comforting all at the same time, and are great friends to have around during spiritual work.

Her wand, tipped with a pinecone, represents both a microcosm of the universe in its essential 3D spiral form, and the pineal gland, the third-eye organ that is associated with spiritual awareness. There is a Piscean symbol on her chest because this card represents fire in its watery form—an apparent contradiction that represents full immersion in the spirit and the knowledge of self, which grants the ability to act through divine power that comes from within.

The magic of the Queen of Wands is being in a fluid state that allows her to inhabit the fulness of manifold being. In this state, all contradictions and delineations disappear and we perceive the world as it truly is: everything and nothing all at once in a moment in time.

(Method: With the Aquarian community in mind and heart, I shuffle the deck until a card falls out. Deck: Thoth Tarot by Aleister Crowley and Lady Frieda Harris)