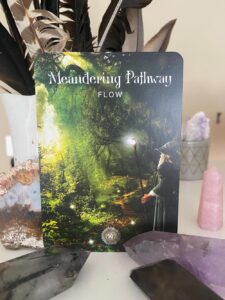 If you’re on a spiritual path, you probably feel just like this wizard: aware of a vast, transcendent, multidimensional reality while feeling stuck in limbo on the earthly plane. This contrast is full of friction especially now, as the first grey shades of dawn appear over the horizon after a very long night. The path has so many twists and turns that it’s impossible to see what’s coming next, even if you can somehow sense it. And maybe the people who trail behind you are not in good spirits, sure that whatever lies around the bend will be worse than what they’ve just been through.

Have faith. The point is to walk the path and bear the difficulties and not lose hope, not because you’re sure something glorious awaits, but because that’s the human experience. To not know and still go on is the ultimate challenge. The trial of third density on Earth is very short compared to other stages of existence. Even if you’ve reincarnated for thousands of years on this planet, it’s like the blink of an eye compared to how long your soul/spirit has actually been around. On some deep level, you really do know how this ends, but you’ve conspired to keep it a secret from yourself. Otherwise it would be cheating! What point is there in playing a game unless there’s a chance you’ll lose?

We have made this meandering path for ourselves to tread as temporary bodies of electrified meat housing consciousness that is enmeshed with the eternal realms and everything in between. The water of spirit forms the bridge and provides sustenance as we teach ourselves new ways of being. Sometimes it’s hard and sometimes it’s easy. Always, it is an adventure.

(Method: With the Aquarian community in mind and heart, I shuffle the deck until a card falls out. Deck: Sacred Forest Oracle by Denise Linn)