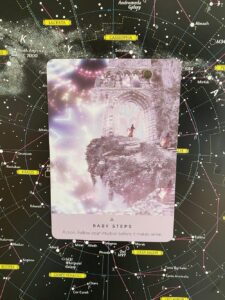 It took me a long time to realize that success and competence are completely unrelated. When I was a kid, I assumed people in leadership positions were there because they had passed a threshold of competence and mastery that other people had not. I assumed that those who made the most money, those who were lauded most favourably in public, had worked tirelessly honing their skills or were at least possessed of undeniable talent. I mean, that’s definitely what we want kids to think so we can trick them into obedience and servitude.

But nothing could be further from the truth. Sure, skill and talent are sometimes rewarded. So are manipulation, deception, cruelty and total incompetence. If there’s no guarantee of success or reward, the path itself must be where value lies. The three identical figures on this card could be moving forwards, backwards or appearing in all three places at the same time. Maybe what’s through the shiny portal is the bottom of the same staircase that we climb over and over again. If I’m interested in a goal, a reward, such a realization could be crushing. But if I’m interested in the nuances of every step, each crack and angle, then every footfall is a new exploration of contact between my foot and the stone. Progress is irrelevant. Little moments of insight are bursts of bliss.