What is a Forest Friend? 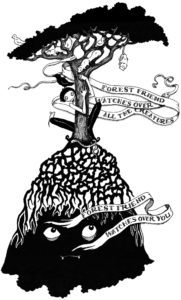 A forest friend is a genderless, adolescent trickster spirit, mentioned since antiquity in stories and songs of rural coastal peoples on the Atlantic seaboard of North America.

According to legend, forest friends live alone in burrows called “hoards”, where they collect magical objects, and will roam hundreds of square

kilometres of woods. They are highly influenced by the moon and some tales allege that they are able to turn invisible at will.

Usually, sighting a forest friend is good luck and may indicate that you have reached a point of focus amidst chaos. The forest friend is associated with a clash of opposing forces (fire/water) and with blithe neutrality, represented by the Fool in tarot arcana.