1. Traffic. The last decade has seen a massive surge in the number of automobiles owned in China, which in Shanghai has prompted the construction of lovely new roads and highways (nary a pothole in sight). This means that traffic is bananas, as are driving habits — as soon as we got out of customs in the airport I could hear the honking outside, which hasn’t stopped. The trip from Pu Dong international airport to our hotel in downtown Shanghai was a good hour of weaving in and out of lanes, honking at cabs and butting into gridlocked lineups. An ordinary Wednesday night, apparently.
There is, however, method in the madness, as I discovered once I started walking around. Unlike in Halifax, where pedestrians wander willy-nilly into the streets, paralyzing the flow of traffic, cars have the right of way in Shanghai but manage to share the street in a mad way. You wait for the green crossing light and then keep an eye on the periphery as you cross, slowing for any cars that are turning against your path. Pedestrians, cars and bikes weave around each other in a rhythmic fashion and as long as you follow the dance, you won’t get creamed.

The Bund, historic side

2. French influence. Shanghai is a city with a long history of French colonial influence, still very visible in the French Concession area, which used to be the foreign financial centre of the city. Many European-style buildings and walled villas built between 1850 and 1930 are still in use after renovations. Nowhere is the eastern/western, historic/modern tension more visible than along the Bund, an area alongside the Huangpu River in the centre of Shanghai. One side features stunning Beaux Arts-style buildings constructed by European investors in the early 20th century while the other remained almost unbuilt until the 1990s and 2000s, when huge skyscrapers and ultramodern architecture started going up as new money flowed into the city following the thawing of relations with the west. 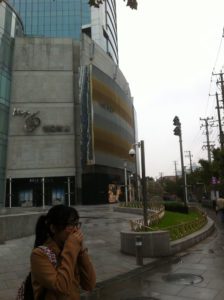 Metallic paneling on the front of Prada Shanghai.

2. Conspicuous consumption. Our hotel is smack in the wealthy shopping district and the streets are lined with massive multi-story malls and huge flagship stores for every major fashion house. Shanghai is a very fashion-conscious place and there are entire streets devoted to premium watches. The French influence is very apparent and European celebrities are plastered onto billboards and windows, hawking everything from La Prairie face cream to Maseratis.
Even though I would love to shop at Marc Jacobs or Miu Miu, that’s not exactly my income bracket. So we checked out an indoor market, which is literally stalls upon stalls of knockoff Beats by Dre headphones, counterfeit handbags and fake Canada Goose coats. Which would be fine if the merchants didn’t accost you at every turn, trying to get you to buy your plastic selfie stick http://www.selfiestick.cn/ from their shop instead of the identical one next door. Even outside on the street, people will hand you business cards for their stall (which is usually named after the merchant, like “WENDY”, “AMY”, “NEW DANNY SHOP”) and if you show any interest, they will try anything to get you to buy.
3. Excessive staff. Seriously there seem to be like 3 employees for every position. The hotel is crawling with greeters, cleaners and desk attendants. Every shop seems to have at least one doorman/guard out front and restaurants are crowded with waiters and hostesses. Dad pointed out that everyone who works in our hotel probably has a college degree since catering to international guests requires decent English. There are many more young people than old, a striking difference from Canada, and in a city with such a huge population (25 million) it’s no wonder that there’s no shortage of workers for even the most demeaning jobs. 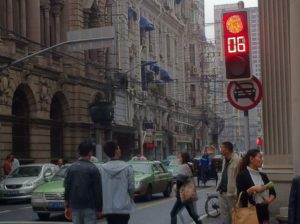 4. Loose rules. Park wherever. Sit wherever. Sleep wherever. Spit wherever. Let your kid shit wherever. Dump your garbage wherever. Wire your electricity however. Carry out minor construction however. Next to comparatively stringent regulations in Canada over social behaviour, business & industry, I sort of love the freedom of it. The rule seems to be that you can do whatever you can get away with, which is kind of my style, although it comes with a fairly hefty price tag if you’re not one of the fortunate few with enough money to make the problems that result from such a loose system go away.

For example, if you’re disabled you’re fucked. Beggars seem to have a pretty good reason to be destitute — no summer punks, nobody’s supplementing their unemployment benefits. Without a social safety net, people who can’t work normal jobs due to illness or addiction are reduced to indigence. Today I saw a man with no legs collecting change, someone sans shoes lying facedown on the sidewalk under a ragged blanket, next to a hat with a few coins in it, and another man huddling near a storefront with his wheelchair bound child and bags of collected junk. Life is much rougher for the unfortunate here and the gap between poor and rich seems to be ever widening. 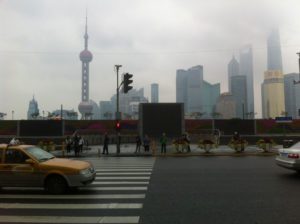 5. Absurd media control. I’m only able to post to my website and Facebook via a virtual environment on my computer (thanks Greg!) that can bypass the Great Firewall of China, which blocks almost everything I depend on: Google, FB, Twitter  — even my own website won’t load properly. (Reddit is an exception, maybe the government isn’t hip to it yet.) Canadian news sites like CBC are blocked as well. Though we were able to watch BBC news on the TV in the hotel, the picture disappeared when a report about China came on, leaving only the audio. For the savvy, these interruptions are inconveniences, which makes the government’s effort seem quixotic in this day and age. But it’s not only media that’s kept under supervision: closed-circuit tv cameras are everywhere, especially in high traffic areas. The government also requires that anyone traveling in China inform them which hotel you’ll be in and for how long as part of the visa application process, which means they can find you whenever they want. So go ahead and shit in the street if you want but you can’t tweet a pic unless you go through a technical rigamarole. Which, I’m sure some would agree, is the way things ought to be.