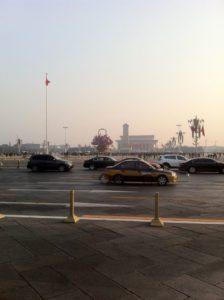 Tianamen Square across the street

1. Holy shit, it’s fucking huge. The streets downtown are 6-8 lanes wide. The buildings look like they were constructed by some brobdingnagian race and span blocks by themselves. The communist-built structures are built to impress — just like the ancient structures — and boy, do they ever. The city has the air not only of a capital, but of the centre of the whole world. Driving down the main avenue, Tim Bousquet’s article on the delusion that Halifax could be a “world class city” suddenly came to mind. Beijing, even at first glance, is so clearly a city of epic proportions in every way that it frames my home as the backwater seaport it really is. A world-class city should leave you breathless — maybe not entirely in a positive way, but in a way you can’t deny. 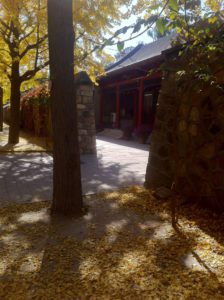 Autumn in the ruins of Yuanmingyuan

2. Smog? What smog? I’m told that, according to the lunar calendar, there is a double September this year in China. That means it’s unusually seasonable for this time of year and the weather has been unbeatable. Wind has blown away the heavy blanket of pollution that usually settles on the city and for the past few days I have been in Beijing, it’s been sunny with blue sky and on the first night the stars and moon were clear and bright, which is hardly what I’d been expecting.

Beijing lies on an arid desert plain, bordered by northern mountains where the Great Wall ribbons up to the Gobi Desert. This time of year it’s very cold in the morning (around 0°) but warms up quickly to the mid-teens in the sun. While my skin prefers the humidity of Shanghai, I love the dry desert weather especially in autumn.

(Edit: I’m aware now that I’m experiencing Beijing under ideal conditions: the APEC Summit in the city means that major construction has been shut down and only half the usual amount of cars are being allowed in the city, leading to a 30-10% decrease in smog.) 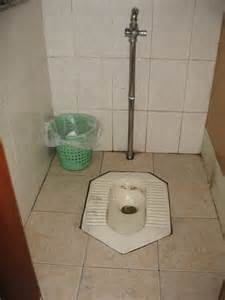 3. Squat toilets. Love them or loathe them, you’re going to have to use them. I’d managed to avoid using one until today in a restaurant. I had to go, the hole was there and I made it happen without incident. This is the flip-side to the good news that there are public toilets everywhere — yes, there are toilets, but you’ll probably going to smell them before you see them. Squatting is definitely more sanitary than planting your ass on a petrie dish of a toilet seat that’s been used by several hundred people since the last time it’s been cleaned. Also good for stretching those stiff North American ankles. I’m sure I’ll feel this way until I manage to pee all over myself one of these days. 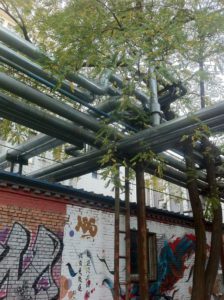 4. Subversive art. The first evening in Beijing, we visited Dashanzi Art District (798 Art Zone), an art conclave that grew up in an abandoned factory area. It was built by East German Bauhaus architects in the 1950s and the buildings have that recognizable European functional feel, and many still bear the motivational Maoist slogans painted in red on the high ceilings.

After the government began moving factories out of the city in the 1980s, the factory was abandoned until the early 2000s, when artists and designers began recognizing the useful space — space with high ceilings, concrete floors, metal piping and interesting lighting which, to me, just scream “art studio”. The galleries, shops and cafes in 798 preserve the history, layering colour, art, photography and old machinery over the utilitarian spaces. It’s immediately clear that for creatives in Beijing (and throughout China) art and design are cherished tools for questioning, subverting and outright mocking the monolithic cultural and political entities that overshadow their lives. 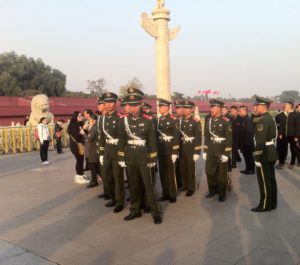 Military in front of the Forbidden City (many of them are younger than me, I think.)

5. Are you sure this is communism? As a Westerner privileged with staying in a nice hotel, with means and time to travel where I please and purchase anything I want, with the knowledge and technology to bypass many of the media restrictions, with physical attributes (white skin, feminine physique) that seem to provoke deference, I might be forgiven for forgetting that I’m in a communist country. The APEC conference is going on right now in Beijing and foreign leaders, including Stephen Harper, have alighted and heightened security is visible everywhere in the city. Even though cars are limited by license plate number (odd numbers one day, even numbers the next) during this event, massive traffic jams ensue as the way is cleared for arriving dignitaries.

Police and military presence are everywhere, standing at corners and intersections, which intimidated me at first until I realized that they serve a dual purpose as city guides. Locals and tourists (there are many Chinese tourists in Beijing) alike ask them questions and the ones I encountered were friendly and helpful. It occurred to me that much like the imposing uniform conceals ordinary people with simple needs & desires, China is a country encased in an outer layer of formidable political and cultural strictures. Underneath I found people to be friendly, polite and interested in a foreigner’s perspective.

6. Fantastic subway. Those who know me will attest to my fascination with public transportation. Even Halifax Metro Transit, which I have often cursed to the lowest circles of hell, is something I have explored thoroughly and used extensively. I enjoy airplanes, subways and trains the most and like to use public transportation in every city I visit, and so far Beijing has the best subway system I’ve ever encountered. I would probably have been too daunted to venture in on my own, but fortunately I had an extremely knowledgable guide.

Haiyan Sun, a Chinese-born Canadian who runs a language school in Halifax and who is along for the trip, very graciously took me out on Monday and introduced me to the subway system. But honestly, it’s so well-designed that I probably could have figured it out on my own. First of all, it’s extremely cheap. Unlike in, say, Berlin, where you could easily go broke just on transit fees, especially if you get confused about what kind of ticket you need (one trip, day pass, Zone A, B or C), the subway in Beijing costs 2 Yuan (the equivalent of about $0.40) no matter where you get on or off. You pay once for a ticket, swipe it to get in in your station of departure and again in your station of exit, with the ability to transfer trains as many times as you wish.

There are 12 subway lines, marked with excellent signage in Chinese characters and pinyin (English phonetic translations), and trains come every 3-5 minutes in every direction. Inside the subway are electronic maps clearly highlighting the direction of travel, the stations you’ve been at, the stations still to come and the station at which you’re arriving, along with audio announcements in English and Chinese. The subway is used by everyone and unlike in the posh shopping district around the hotel that is full of foreigners, I definitely stood out as a young white girl, especially when I was on my own on the way back, though I felt very safe the whole way.

7. Part of the show. The Forbidden City even lived up to its name on Monday when I wanted to visit: it was closed to the public. Instead, Haiyan took me to the north-western part of Beijing with designs on visiting the Summer Palace, which also turned out to be closed for rehearsals for some official event. (I am placing that blame squarely on Harper, that bastard.) Instead, she took me to the ruins of the Old Summer Palace (Yuanmingyuan), a huge garden full of lakes and falling leaves and the remains of Emperor Kingxi’s palace that was looted in 1860 by French allied forces and further destroyed in the 1980s.

On the north side I could see the mountains and the Great Wall weaving over the undulations and decided it would be appropriate to draw something. So I sat down near a lake with my notebook and pen, sketching a scene, which seemed to impress the Chinese visitors (there were many since other attractions were closed) so much that people started to take pictures of me. Some stopped and asked (very politely, with gestures) to see my work and were very enthusiastic — less, I think, because of the quality of my work and more because I seemed to appreciate the surroundings in the same way that they did.